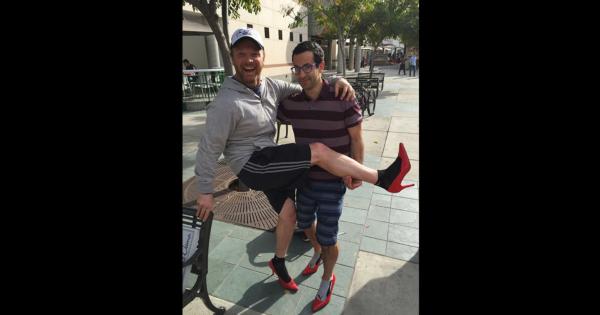 To increase male student retention and combat sexual violence, one California university is offering a “safe space” for male-identifying students to discover their authentic masculinity.

“Dudes Understanding Diversity and Ending Stereotypes (DUDES) is a traveling Men’s Center, housed in the Campus Diversity and Inclusion Center for students who identify as Men, as well as women, transgendered students, and male allies,” the University of Redlands states on its website.

“If you’re standing on the outside of this stuff, maybe it looks like bullshit, but that’s cool too.”

The DUDES Resource Center, the description elaborates, “provides support for students who would like a safe space to talk about men’s issues, get involved on campus, and discuss issues regarding masculinity, media, gender roles, etc.”

DUDES is one of five “Gender Programs” at Redlands that are designed to supplement the work of the Women’s Center and the Women’s Gender and Sexuality Studies Department. The other initiatives include a “Masculinity Discussions” series, as well as three programs that provide resources and support for victims of sexual assault and domestic violence.

The “Masculinity Discussion” series provides students with alternative views of masculinity, because according to the website, “We believe it is crucial to deconstruct our societal understanding of masculinity and establish more inclusive definitions of manhood as part of the effort to reduce violence in our communities.”

DUDES other offerings include a fraternity-like brotherhood for male students interested in social justice called Rangi Ya Giza (RYG), as well as the Men Achieving Leadership Excellence and Success Institute, or MALES.

RYG hosted a rally this spring to discuss “issues of modern policing,” at which they encouraged participants to sign a petition asking the Department of Justice to mandate better data reporting in police departments.

At another DUDES event, students discussed a perceived connection between masculinity and gun violence, and one professor presented research suggesting that guns and swords have been seen as phallic symbols for centuries.

Zack Ritter, Associate Director for Campus Diversity and Inclusion at the university, told Campus Reform that the male retention rate on campus is around 85 percent, while females stay in school at a rate of 90 percent. The Men’s Retention Committee formed DUDES to help close that gender gap while also demonstrating that Redlands men aren’t male chauvinists.

Gawker mocked Redland’s use of acronyms for its masculinity programs Wednesday by referring to the fictitious Brothers Allied to Learn Life Successfully (BALLS), which the article says recently created a program known as Progressive Excellence Needs Institutional Support (PENIS), which in turn spawned its own offshoot called Diversity Is Coherent Knowledge Helping Every Action Demand Solutions (DICKHEADS).

Ritter told Campus Reform that the Gawker article didn’t bother him, and that he was happy for the publicity.

“If you’re standing on the outside of this stuff, maybe it looks like bullshit, but that’s cool too,” Ritter said. “This is a democracy and you can believe what you want to.”

Ritter pointed out that the programs at Redlands were meant to help students feel comfortable with their gender identity, not to condemn them for it.

As a case in point, he noted that the Campus Diversity & Inclusion program recently posted pictures to their Instagram and Facebook accounts of a December event at which male students were encouraged to try walking down a red carpet in high heels.

Ritter explained that the high heels walk is meant to help students find comfort in expressing themselves, noting that he himself would feel uncomfortable walking around campus in high heels.

Ritter said he thinks many high school students entering college develop unhealthy views of masculinity and sex from Hollywood movies, which can cause problems for them in college.

“I think we’re trying to get men to break their stereotypes they have about women,” he asserted, saying, “if we can start breaking that cycle, we can start changing society.”

According to Ritter, DUDES has a busy schedule planned for the upcoming fall semester. They will be holding a conversation about pornography for the second time with Let’s Understand Sex Together (LUST), as well as their high heels event during DUDES Week.

In addition, a film series featuring titles like “The Empathy Gap” and “The Bro Code” will tackle how young men view women in society today, and Ritter said he is also looking forward to holding discussions featuring student athletes and coaches at the school about breaking down stereotypes between athletes and other students.

Ritter believes that social justice education can be a positive influence for students, and would like to see students making micro-corrections in their daily lives.

“Every day may be a renaissance for you,” he said. “On an individual level you can make change for your life.”