In anticipation of Ben Shapiro’s impending visit, an “anti-fascist” group has papered the University of California, Berkeley’s campus in flyers accusing him of “intellectual thuggery.”

Shapiro is scheduled to give a speech titled “Campus Thuggery” next Thursday, prompting the “Refuse Fascism” organization to respond with flyers countering that the real problem is not violence by intolerant leftists, but the existence of conservative viewpoints.

"It's always fascinating to be called a fascist by actual fascists who think speech is violence."

[RELATED: Antifa plans march to ‘defend Berkeley from the Alt-right’]

“No Ben Shapiro: The Problem is NOT ‘Campus Thuggery’ The Problem is Fascist Intellectual Thuggery in the service of the Trump/Pence Fascist Regime,” the flyer states, inviting readers to “a people’s speak out against white supremacy, misogyny, xenophobia, and fascism” scheduled to coincide with Shapiro’s speech. 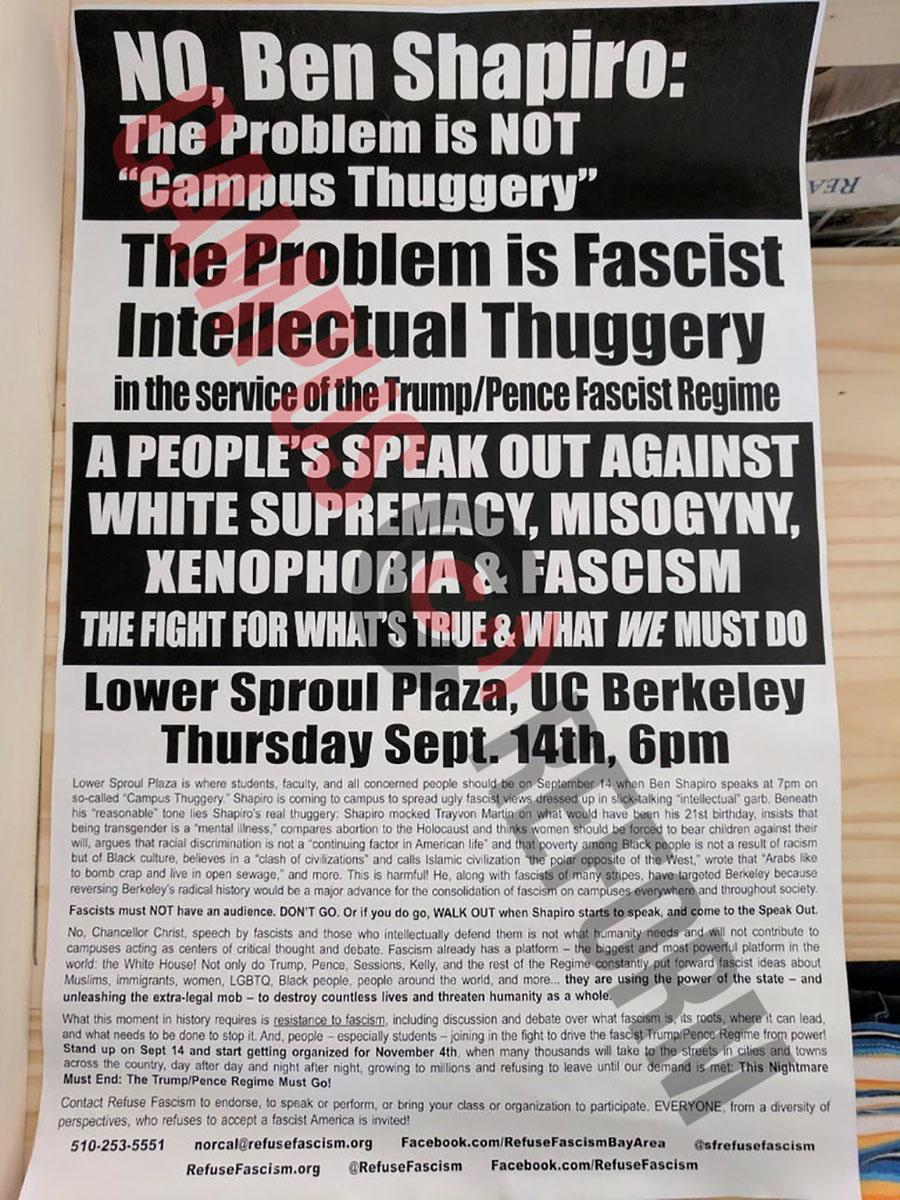 “Shapiro is coming to campus to spread ugly fascist views dressed up in slick-talking ‘intellectual’ garb,” the flyer claims, criticizing Shapiro’s views on topics such as transgenderism, abortion, and Trayvon Martin.

“Beneath his ‘reasonable’ tone lies Shapiro’s real thuggery,” the leaflet asserts, contending that Shapiro, “along with fascists of many stripes, have targeted Berkeley because reversing Berkeley's radical history would be a major advance for the consolidation of fascism on campuses everywhere and throughout society.”

The organization argues that Shapiro does not deserve a platform on UC-Berkeley’s campus because “speech by fascists and those who intellectual defend them is not what humanity needs and will not contribute to campuses acting as centers of critical thought and debate,” adding that “fascism already has a platform—the biggest and most powerful platform in the world: the White House!”

Contrary to the flyer’s accusations, however, Shapiro is actually a frequent critic of the Trump Administration, and even claims that he did not vote for Donald Trump.

“It's always fascinating to be called a fascist by actual fascists who think speech is violence. I'm glad these people want to exercise their right to protest,” Shapiro told Campus Reform.

“That's America!” he noted approvingly. “But the suggestion that anyone who disagrees is therefore a ‘fascist’ and must be shut down—the link between this group and Antifa is well-established—demonstrates who the true fascists are.”

According to Lone Conservative, tickets for Shapiro’s event went on sale late Thursday night, and were sold out within 45 minutes.