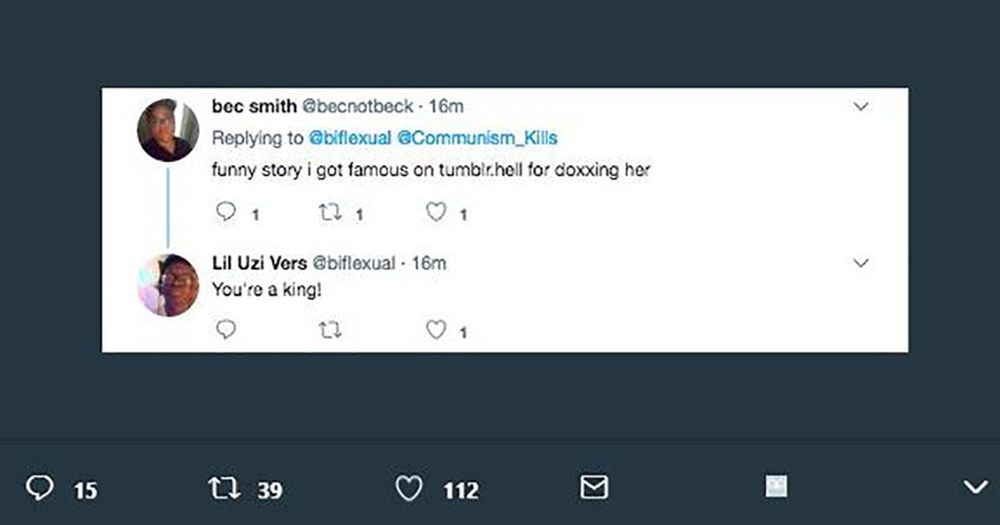 A Stanford University student recently bragged about doxxing a popular libertarian journalist in 2014, which resulted in death threats against her and her family.

“Funny story i got famous on tumblr.hell for doxxing her [sic],” student Bec Smith tweeted Sunday in reference to his 2014 doxxing of journalist Ashley Rae Goldenberg.

Goldenberg, who runs the popular site Communism Kills, was doxxed after posting a satirical limerick about the death of Michael Brown to Tumblr, which was shared more than 10,000 times before users published her credit card number, phone number, and home address, resulting in a deluge of rape and death threats.

At the height of the harassment, Goldenberg received more than 200 phone calls per night as her parents were threatened with violence, and strangers demanded her expulsion from George Mason University, though she has since graduated.

While it is possible that multiple people were involved with the 2014 doxxing, Smith is the only person to confess personal responsibility.

Goldenberg told Campus Reform that the fallout from the doxxing attempt was tremendous, noting that her university was bombarded with phone calls encouraging the administration to expel her, people began stalking her on campus, and someone even filed an anonymous Title IX complaint against her boyfriend in attempt to get him in trouble.

“But the worst thing of all is that people started messaging my mother—with rape threats, with rape threats against me, with death threats—because she happened to give birth to me and I said something they didn't like online,” Goldenberg told Campus Reform.

Goldenberg went on to reveal that the doxxers initially targeted the wrong family, resulting in similar grief for people whose only offense was to share her last name, adding that “they're not the first people to ever fall victim to a mistaken identity in the heat of the moment.”

She said she wasn’t surprised to see Smith bragging about doxxing her, saying that after the doxxing “hundreds of thousands of people rejoiced in sharing my parents’ and my personal information.”

“Whoever doxxed me was considered a social justice hero, someone who created ‘real justice,’ somehow, for Mike Brown, and took a stand against whatever -ism I was deemed to perpetuate,” she continued, adding that Bec just wanted “some brownie points for being able to (temporarily) ruin someone’s life for the cause.”

Campus Reform reached out to Smith for an elaboration on his Tweet, but he provided numerous contradictory statements. Smith, who is a computer science major, claimed that he doesn’t “even know how to doxx people,” and that he “didn’t brag.”

In response, Campus Reform forwarded him a screenshot of his tweet, upon which he asserted that he does not “consent” to the use of any of his images, later declining to clarify his situation and eventually blocking the reporter on Twitter to prevent further inquiries.

Eventually, he deleted his original tweet in which he claimed that he doxxed Goldenberg.

Stanford Vice President for Communications Lisa Lapin confirmed with Campus Reform that Smith has been enrolled at Stanford, but was unable to confirm that he is still a current student, citing an issue with the Registrar.